What does it mean to be in Christ? 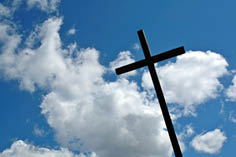 An expression we have all heard before. Albert Schweitzer described being in Christ as the main mystery of the apostle Paul's teaching. And finally Schweitzer had to know. As a famous theologian, musician and important mission doctor, the Alsatian was one of the most outstanding Germans of the 20th century. In 1952 he was awarded the Nobel Prize. In his book The Mysticism of the Apostle Paul, published in 1931, Schweitzer emphasizes the important aspect that Christian life in Christ is not God-mysticism, but, as he describes it himself, Christ-mysticism. Other religions, including prophets, fortune tellers or philosophers - in whatever form - search for "God". But Schweitzer recognized that for Paul the Christian hope and daily life have a more specific and certain orientation - namely new life in Christ.

In his letters Paul uses the expression "in Christ" no less than twelve times. A good example of this is the edifying text in 2 Corinthians 5,17: «Therefore: if someone is in Christ, he is a new creature; the old has passed, behold, the new has become. » Ultimately, Albert Schweitzer was not an Orthodox Christian, but only a few people described the Christian spirit more impressively than he did. He summed up the apostle Paul's thoughts in this regard with the following words: "For him [Paul], the believers are saved by the fact that in communion with Christ they enter into the unearthly state in natural world times through a mysterious death and resurrection with him in which they will be in the kingdom of God. Through Christ we are freed from this world and put into the mode of being of the kingdom of God, although this has not yet appeared ... » (The Mysticism of the Apostle Paul, p. 369).

Note how Schweitzer shows that Paul sees the two aspects of the coming of Christ connected in an end-time arc of tension - the kingdom of God in present life and its completion in future life. Some may not approve of Christians swaggering around with expressions such as "mysticism" and "Christ-mysticism" and dealing more amateurishly with Albert Schweitzer; However, it is indisputable that Paul was certainly both a visionary and a mystic. He had more visions and revelations than any of his church members (2 Corinthians 12,1: 7). But how is all this related in concrete terms and how can it be reconciled with the most important event in human history - the resurrection of Jesus Christ?

To say it straight away, the topic of mysticism is of crucial importance for the understanding of verbose texts like Romans 6,3: 8: «Or do you not know that all we were baptized into Christ Jesus are in his death baptized? So we are buried with him through baptism into death, so that, like Christ raised from the dead by the glory of the Father, we too can walk in a new life. Because if we are connected with him and have become like him in his death, we will be like him in the resurrection ... But if we died with Christ, we believe that we will also live with him ... »

This is Paul as we know him. He viewed the resurrection as the linchpin of Christian teaching. Thus, baptism means that Christians are not only symbolically buried with Christ, they also symbolically share the resurrection with him. But here it goes a bit beyond the pure symbolic content. This sophisticated theologizing goes hand in hand with a good dose of hard-hitting reality. Look at how Paul continues this topic in his letter to the Ephesians in chapter 2, verses 4-6: «But God, who is rich in mercy, has in his great love ... also us who were dead in sins, made alive with Christ - you have been saved by grace - and he has raised us up and put us in heaven in Christ Jesus. » How was it? Read that again: are we in heaven in Christ?

How can that be? Well, again, the words of the apostle Paul are not meant literally and concretely here, but of metaphorical, indeed mystical, meaning. He explains that thanks to God's power to give salvation, which is manifested in the resurrection of Christ, we can already enjoy participation in the kingdom of heaven, the dwelling place of God and Christ, through the Holy Spirit. This is promised to us through life in Christ, his resurrection and ascension. All of this is possible because of being in Christ. We could call this insight the principle of resurrection or resurrection factor.

Once again, we can only look with awe at the immense driving force that comes from the resurrection of our Lord and Savior, knowing that it is not only the most important historical event, but also a leitmotif for everything that believers in this world have to offer hope and may expect. "In Christ" is a mystical expression, but with its far more profound meaning it goes beyond the purely symbolic, rather comparative character. It is closely related to the other mystical phrase “used in heaven”.

Consider the important explanations of some outstanding Bible exegetes on Ephesians 2,6. The following is Max Turner in The New Bible Commentary, 21st Century: "To say that we were brought to life with Christ seems to be the short version of the statement that we should be resurrected with Christ," and we can speak of it as if this had already happened because, firstly, the decisive event of the resurrection [Christ] is in the past and secondly, we are already beginning to participate in that newly created life through our present fellowship with him » (P. 1229).

We are of course united with Christ through the Holy Spirit. Therefore, the world of thought behind these extremely sublime ideas is only revealed to the believer through the Holy Spirit himself. Now look at Francis Foulkes' commentary on Ephesians 2,6 in The Tyndale New Testament: «In Ephesians 1,3, the apostle led from that God blessed us in Christ with all spiritual blessings in heaven. Now he specifies that our life is there now, put into heavenly sovereignty with Christ ... Thanks to Christ's victory over sin and death and through his exaltation, humanity has been lifted from the deepest hell to heaven itself ' (Calvin). We now have civil rights in heaven (Philippians 3,20); and there, free from the restrictions and limits imposed by the world ... you will find real life » (P. 82).

In his book The Message of Ephesians With regard to Ephesians 2,6, John Stott comments as follows: «What amazes us, however, is the fact that Paul is not writing about Christ here, but about us. He does not confirm that God awakened Christ, exalted and placed him in heavenly rule, but that he awakened us with Christ, exalted and put us in heavenly rule ... This idea of ​​the communion of God's people with Christ is the basis of New Testament Christianity . As a people who are in Christ, they have a new solidarity. By virtue of his fellowship with Christ, it actually participates in his resurrection, ascension and institution.

With "institution", Stott refers in the theological sense to Christ's present rule over all creation. According to Stott, all this talk about our common rule with Christ was not "meaningless Christian mysticism". Rather, it is an important part of Christian mysticism and even goes beyond it. Stott adds: "In Heaven, the invisible world of spiritual reality, where powers and powers reign (3,10; 6,12) and where Christ rules over everything (1,20), God has blessed his people in Christ (1,3) and put it into heavenly sovereignty with Christ ... It is personally attested that Christ gave us a new life on the one hand and a new victory on the other hand. We were dead, but we were made spiritually alive and alert. We were in captivity but were placed in heavenly rule. »

Max Turner is right. In these words lies more than pure symbolism - as mystical as this doctrine seems. What Paul is explaining here is the real meaning, the deeper meaning of our new life in Christ. In this context, at least three aspects should be highlighted.

First of all, as far as their salvation is concerned, Christians are "as good as at their destination". They who are "in Christ" are forgiven their sins through Christ himself. They share death, funeral, resurrection, and ascension with him and, to a certain extent, already live with him in the kingdom of heaven. This teaching should not serve as an idealistic temptation. It originally addressed Christians who lived in the most terrible conditions in corrupt cities without the civil and political rights that we often take for granted. For the reader of the Apostle Paul, death from the Roman sword was entirely possible, although one should not forget that most people at that time were just 40 or 45 years old anyway.

Paul thus encourages his readers with another thought borrowed from the core teaching and characteristic of the new faith - the resurrection of Christ. To be "in Christ" means that God, when he looks at us, does not see our sins. He sees Christ. No lesson could make us more hopeful! This is emphasized again in Colossians 3,3: "Because you have died and your life is hidden with Christ in God" (Zurich Bible).

Second, to be "in Christ" means to live as a Christian in two different worlds - in this world of everyday reality and in the "invisible world" of spiritual reality, as Stott calls it. This affects the way we see this world. This is how we should live a life that does justice to these two worlds, whereby our very first duty of loyalty is to the kingdom of God and its values, but on the other hand we should not be so beyond that we do not serve the earthly well-being. It is a tightrope walk and every Christian needs the help of God to survive safely.

Thirdly, to be "in Christ" means that we are victory signs of God's grace. If Heavenly Father did all of this for us, sort of giving us a place in the Kingdom of Heaven, it means that we should live as Christ's ambassadors.

Francis Foulkes puts it this way: "What God, according to the apostle Paul, understands with his church goes far beyond themselves, the redemption, the enlightenment and the new creation of the individual, about their unity and their succession, even about their testimony towards this world. Rather, the church should testify to all of creation against the wisdom, love and grace of God in Christ » (P. 82).

How true. To be "in Christ", to receive the gift of new life in Christ, to know our sins hidden from God through him - all this means that we should behave in a Christian manner towards the people we deal with. We Christians may go different ways, but towards the people with whom we live here on earth we meet in the spirit of Christ. With the resurrection of the Savior, God did not give us a sign of his omnipotence, so that we go vanity, but bear witness to his goodness anew every day and, through our good deeds, show a sign of his existence and his boundless care for everyone put this globe. Christ's resurrection and ascension have a profound influence on our attitude towards the world. The challenge we have to face is to live up to this reputation 24 hours a day.

What does it mean to be in Christ?