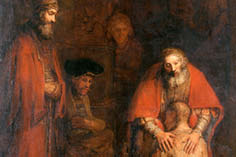 With the intention of offering her the best, I went with Tammy (my wife) for lunch at Burger King (According to your taste), then to the Dairy Queen for dessert (Something different). You may think that I should be embarrassed about the showy use of the company slogans, but as McDonalds says: "I love it". Now i need you (and especially Tammy!) ask for forgiveness and leave the stupid joke aside. Forgiveness is a key in building and strengthening relationships that are enduring and invigorating. This applies to relationships between managers and employees, husbands and wives, as well as parents and children - for human relationships of all kinds.

Forgiveness is also a vital component in the relationship God has with us. God, who is love, has covered humanity with a blanket of forgiveness that He unconditionally spread over us (ie that we receive his forgiveness undeservedly and without consideration). By receiving forgiveness through the Holy Spirit and living in it, we are gaining a better understanding of how glorious and wonderful God's love, which is shown through His forgiveness, is real. As David pondered God's love for mankind, he wrote: "When I see the heavens, your fingers, the moon and the stars that you have prepared: what is man that you remember him, and man's child, that you take care of him? » (Psalm 8,4: 5). I, too, can only be amazed if I consider: the great power and exuberant generosity of God in creating and maintaining our vast universe, which includes a world that, as he knew, the death of his son, instead of apparently insignificant and certainly sinful ones Creatures like you and me, would require.

In Galatians 2,20, Paul writes how happy he is that Jesus Christ, who loved us, gave himself up for us. Unfortunately, this wonderful truth of the gospel is drowned out by the “noise” of our fast-moving world. If we are not careful, we can lose our attention for what the Scriptures have to say about God's love, which is shown in exuberant forgiveness. One of the most rousing lessons in the Bible about God's forgiving love and grace is Jesus' parable of the prodigal son. Theologian Henry Nouwen said he learned a lot about it when he looked closely at Rembrandt's painting "The Return of the Prodigal Son." It portrays the remorse of the ungodly son, the unjustified severity of the angry brother's jealousy, and the inevitable loving forgiveness of the father who represents God.

Another profound example of God's forgiving love is the staged parable that is recounted in the Book of Hosea. What happened to Hosea in his life shows in the same way God's unconditional love and exuberant forgiveness for often obstinate Israel and serves as an overwhelming demonstration of his forgiveness, which is granted to all people. God told Hosea to marry a prostitute named Gomer. Some believe that it meant a woman from the spiritually adulterous northern realm of Israel. In any case, it was not the marriage one would normally wish for, since Gomer repeatedly left Hosea to live a life in prostitution. At one point it is said that Hosea Gomer is believed to have bought back from slave traders, but she continued to run to her lovers who promised her material gain. “I want to run after my lovers,” she says, “who give me my bread and water, wool and flax, oil and drink” (Hosea 2,7). Despite all of Hosea's attempts to keep her from doing so, she continued to seek sinful fellowship with others.

It touches very much how Hosea repeatedly took in his wayward wife - she continued to love and forgive her unconditionally. Maybe Gomer has occasionally tried to get things right, but if they did, their remorse was short-lived. Soon she fell back into her adulterous way of life to run after other lovers.

Hosea's loving and forgiving treatment of Gomer shows God's loyalty to us even when we are unfaithful to him. This unconditional forgiveness does not depend on how we behave towards God, but who God is. Like Gomer, we believe we can find peace by entering new forms of slavery; we reject God's love by trying to go our own way. At one point, Hosea Gomer had to buy out material possessions. God, who is love, paid a much higher ransom - he gave his beloved son Jesus "for everyone for salvation" (1 Timothy 2,6). God's unshakable, never failing, never ending love "endures everything, she believes everything, she hopes everything, she tolerates everything" (1 Cor. 13,7). She also forgives everything, because love "does not count evil" (1 Cor. 13,5).

The exaggerated use of forgiveness suggests rejection rather than acceptance of God's grace. Such apprehension never leads to a joyful, reconciled relationship with God. Nevertheless, such rejection does not cause God to withdraw his offer of forgiveness. God offers forgiveness in Christ to all people, which is unconditional, regardless of who we are or what we do.

Those who have God's unconditional grace (as the prodigal son) assumed, this forgiveness does not presume. Knowing that they are unconditionally forgiven, their reaction is not presumptuousness or rejection, but rather relief and gratitude, which expresses the desire to return forgiveness with kindness and love. When we receive forgiveness, our minds are freed from the blockages that quickly build walls between us, and we then experience the freedom to grow in our relationships. The same is true if we unconditionally forgive those who have sinned against us.

Why should we desire to unconditionally forgive others who have wronged us? Because it corresponds to how God forgives us in Christ. Notice the statements of Paul:

But be friendly and kind to one another and forgive one another, as God has forgiven you in Christ (Ephesians 4,32).

So now draws on as God's chosen ones, as saints and loved ones, warm mercy, kindness, humility, gentleness, patience; and endure one another and forgive one another if someone has complaint against the other; as the Lord forgave you, so do you forgive! But above all attracts love, which is the bond of perfection (Colossians 3,12: 14).

In the joy of how much forgiveness has blessed my relationships.