When the time was right 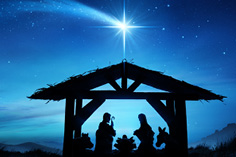 People like to say that God always chooses the right time and I am sure that this is true. One of my memories of the beginner Bible course is an "aha experience" that I experienced when I learned that Jesus came to earth at just the right time. A teacher explained how everything in the universe had to come to a proper match so that all the prophecies about Jesus would be fully fulfilled.

Paul spoke to the church in Galatia about God's childhood and being in the bondage of the powers of the world. "But when the time was fulfilled, God sent his son, born of a woman and put under the law to redeem those who were under the law, so that we could be a child (the full rights of childhood) received » (Galatians 4,4: 5). Jesus was born when the time was fully fulfilled. In the Elberfeld Bible it says: "when the abundance of time came".

The constellation of the planets and stars fit. The culture and the education system had to be prepared. The technology or its nonexistence was right. The Earth governments, especially the Romans, were on duty at the right time.

A commentary on the Bible explains: «It was a time when the« Pax Romana » (the Roman peace) spanned large parts of the civilized world and travel and trade were possible like never before. Large roads connected the empire of the emperors and its various regions were connected in an even more significant way by the all-pervading language of the Greeks. Add the fact that the world was in a moral abyss so deep that even the pagans cried out and spiritual hunger was everywhere. It was the perfect time for Christ's coming and for the early spread of the Christian gospel » (The Expositor's Bible Commentary).

All of these elements played a role when God chose this very moment to begin his stay as man and God in Jesus and his way to the cross. What an incredible coincidence of events. One might think of the members of an orchestra practicing the individual parts of a symphony. On the evening of the concert, all parts, clever and beautifully played, come together in brilliant harmony. The conductor raises his hands to signal the final screschendo. The timpani sound and the built-up tension is dissolved in a triumphant climax.

Jesus is this culmination point, the summit, the top, the culmination of God's wisdom, power and love! "Because the fullness of the deity dwells in him bodily" (Colossians 2,9).

When the time was fulfilled, Christ came, who is the fullness of the Godhead. «So that their hearts can be comforted, united in love and for all wealth in certainty of understanding for the knowledge of the mystery of God, that is Christ, in which all treasures of wisdom and knowledge are hidden» (Colossians 2,2-3 Eberfeld's Bible). Hallelujah and Merry Christmas!

When the time was right