Nothing separates us from the love of God 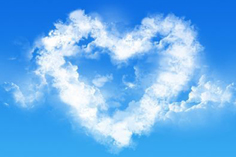 Again and again «Paul argues in the Letter to the Romans that we owe it to Christ that God regards us as justified. Although we sometimes sin, these sins count against the old self that was crucified with Christ; our sins do not count against what we are in Christ. We have a duty to fight sin - not to be saved, but because we are already children of God. In the last part of chapter 8, Paul focuses on our glorious future.

The entire creation is waiting for us

Christian life is not easy. The fight against sin is not easy. Persistent persecution is not easy. Coping with everyday life in a fallen world, with corruptible people, makes life difficult for us. Nonetheless, Paul says: «that suffering at this time does not count against the glory that is to be revealed to us» (Verse 18). Just as it was for Jesus, joy is there for us too - a future so wonderful that our present trials will seem insignificant.

But we are not the only ones who will benefit from it. Paul says that there is a cosmic scope for God's plan that is being worked out in us: "Because the fearful wait of the creature is waiting for the children of God to be revealed" (Verse 19). Creation not only wants to see us in glory, but creation itself will also be blessed with change if God's plan is brought to perfection, as Paul says in the next verse: «Creation is subject to transience ... yes for hope; for creation too will be free from the bondage of impermanence to the wonderful freedom of God's children » (Verses 20-21).

Creation is now decaying, but it is not as it should be. At the resurrection, if we are given the glory that rightly belongs to the children of God, the universe will somehow be freed from its bondage. The entire universe has been redeemed through the work of Jesus Christ (Colossians 1,19: 20).

Although the price has already been paid, we do not yet see everything as God will accomplish it. "All of creation now sighs under its condition, as if it were in labor pains" (Romans 8,22 New Geneva Translation). Creation suffers as if it were in labor pains because it forms the lap in which we are born. Not only that, "but we ourselves, who have the first gift of the Spirit, still sigh inwardly and are waiting for adoption as sons and the redemption of our bodies" (Verse 23 New Geneva Translation). Even though we have been given the Holy Spirit as a pledge for salvation, we are also fighting because our salvation is not yet complete. We struggle with sin, we struggle with physical limitations, pain and suffering - even as we rejoice in what Christ has done for us.

Salvation means that our bodies are no longer subject to decay (1 Corinthians 15,53), newly made and transformed into glory. The physical world is not waste that needs to be disposed of - God made it good and He will make it new again. We do not know how bodies are resurrected, nor do we know the physics of the renewed universe, but we can trust the Creator to accomplish his work.

We still do not see perfect creation, neither in the universe nor on earth, nor in our bodies, but we are confident that everything will be transformed. As Paul said: «Because we are saved, but we hope. But the hope you see is not hope; because how can you hope for what you see? But if we hope for what we don't see, we wait patiently » (Romans 8,24-25).

We wait patiently and eagerly for our bodies to be resurrected once our adoption is complete. We live in the situation of «already, but not yet»: already redeemed but not yet fully redeemed. We are already released from condemnation, but not yet completely from sin. We are already in the kingdom, but it is not yet in its fullness. We live with aspects of the age to come while we are still struggling with aspects of that age. "Likewise, the spirit helps up our weakness. Because we don't know what to pray, how it's supposed to be; but the spirit itself represents us with an inexpressible sigh » (Verse 26). God knows our limits and frustrations. He knows our flesh is weak. Even if our spirit is willing, God's spirit stands up for us, also for needs that cannot be put into words. God's Spirit does not remove our weakness, but helps us in our weakness. He bridges the gap between old and new, between what we see and what he has explained to us. For example, we sin even though we want to do the good (7,14-25). We see sin in our lives, but God declares us righteous because God sees the end result, even if the process has just started.

Called for His Declaration Despite our trials, weakness, and sins, "we know that those who love God serve all things well, those who are called after his counsel" (Verse 28). God does not cause all things, but allows them and works with them according to his advice. He has a plan for us and we can be sure that he will accomplish his work in us (Philippians 1,6).

God planned in advance that we should become like His Son Jesus Christ. So he called us through the gospel, justified us through his son, and united us with him in his glory: "For those whom he chose, he also predetermined that they should be the same as his son's picture so that he would be the firstborn among many brothers. But what he has predetermined, he has also called; but which he has called, he has justified; but which he has justified, he has also glorified » (Romans 8,29-30).

The meaning of election and predestination is the subject of heated debate, but these verses do not clarify the debate, because Paul is not concentrating on these terms here (and not elsewhere either). For example, Paul does not comment on whether God allows people to reject the glorification he has planned for them. Here, as Paul approaches the apogee of his proclamation of the gospel, Paul wants to assure readers that there is no need to worry about their salvation. If they accept it, they will get it too. And for rhetorical clarification, Paul even says that God has already glorified it by using the past tense. It’s pretty much done. Even if we struggle in this life, we can count on glorification in the next life.

«What do we want to say now? God is for us, who can be against us? Who didn't spare his own son, but gave him up for us all - how could he not give us everything with him? » (Verses 31-32). Since God went so far as to give His Son for us when we were sinners, we can be sure that He will give us whatever we need to do it. We can be sure that he will not be angry with us and take his gift away. «Who wants to blame God's elect? God is here who makes righteous » (Verse 33). No one can accuse us on the day of judgment because God has declared us innocent. Nobody can judge us because Christ, our Redeemer, stands up for us: «Who wants to condemn? Christ Jesus is here who died, or rather, who is also raised, who is at the right hand of God and who represents us » (Verse 34). We have not only a sacrifice for our sins, but also a living Savior who is always with us on our path to glory.

Paul's rhetorical skill is shown in the moving climax of the chapter: «Who wants to part us from the love of Christ? Tribulation or fear or persecution or hunger or nakedness or danger or sword? As it is written (Psalm 44,23): »For your sake we are killed all day long; we are respected like slaughter sheep «» (Verses 35-36). Can circumstances separate us from God? If we are killed for the faith, have we lost the fight? No way, says Paul: "In all of this we are more than conquerors by the one who loved us so much" (Verse 37 Elberfeld). We are not losers in pain and suffering either - we are better than overcomers because we share in the victory of Jesus Christ. Our victory prize - our inheritance - is the eternal glory of God! This price is infinitely greater than the cost.

"For I am certain that neither death nor life, neither angels nor powers nor powers, neither the present nor the future, neither high nor deep nor any other creature can separate us from the love of God, which is in Christ Jesus, our Lord" (Verses 38-39). Nothing can divert God from the plan he has for us. Absolutely nothing can separate us from his love! We can trust in the salvation He has given us.

Nothing separates us from the love of God